Rambling the Night Away

I'm alive! I know it's been a bit since I've given any sort of update. So sorry for the delay. I've been having trouble juggling things, but what is new.

I haven't written in close to 5 months. I made a vow to myself that I was going to focus on myself and life and try to meet someone first. I thought I may have found that with someone, but it wasn't right. I haven't been out with anyone since, but I am back on the dating websites.

I feel like a failure as a writer because I can't shut my brain off for 2.5 seconds enough to jot down some words. Maybe someday I will get back to that.

The last song I wrote was in January, Wolves, but we will not get to release that for quite sometime. I have been contemplating putting myself back out there again whether it is singing or acting. I just miss being onstage.

In less than a month I am headed to Maui with two of my co-workers. It has been so long since I've been on a vacation, and I'm really excited to finally go back to Hawaii after six years! I am going to try to eat more streamlined until then. Fruit, salads, white rice, etc. I am also going to be trying to get off my ass and work out. I want to feel and look better than I do.

I got my taxes done and it was a huge punch in the gut. I am going to have to pay the IRS $1100 back. Since when is that fair? I paid nearly $10k in taxes already, but apparently that was just not enough. It doesn't help that I have no write offs. I could have saved all my book expenses, but it really wouldn't have made much of a difference.

On the positive side of things, I just recently got a promotion with a raise. I get to keep my same title for my own sanity, but I'm happy my hard work is being rewarded. Also, I've been helping build the career of a "Tina Turner Impersonator" and while it sounds crazy, I foresee a little extra money. :)

A lot of auditions came through for Emerging from Darkness. I am really excited. It is going to be so different than the first narrator. I can't wait to hear the finished book.

Also, totally random, but a lot of people have been telling me that I need to try being a stand-up comedian. I've never thought about it but I know I can make people laugh for the most part as long as they know me. I've been thinking a little bit on it, but I just think my delivery sucks. If I can get it down, I'm going to try to tackle a couple of open mics.

I know I'm just rambling, but I rarely come on here so I want to be thorough!

Anyways, don't forget - if you're not doing something you love, you're not really living. <3 font="">
Posted by Krista at 6:16 PM No comments:

BY L A COTTON
To celebrate the release, L A Cotton is giving you the chance to win a $25 Amazon gift card.
ENTER HERE 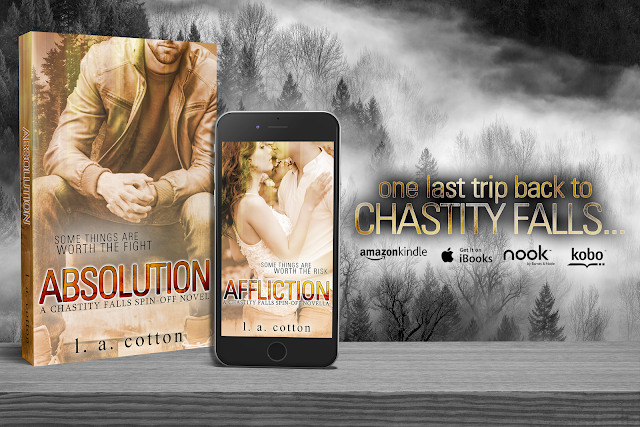 START THE SERIES FOR ONLY 99c

It’s supposed to be a job like any other. Get in. Do the deal. Get out. But when Dennis Hayes spots her across the room, he’s sure he must be seeing things. It can’t be Cassie Malson, the only girl he ever loved. Still loves. Because four years ago he left her to live her dreams—without him.

He doesn’t want to open old wounds, but Dennis can’t walk away again. He won’t. Not until he finds out the reason for the haunted look in her eyes. Even if she hates him. Even if the truth hurts him more than he ever anticipated.

Even if it means going against everything he’s ever known.

Because Cassie Malson is his absolution, and this time he’s determined to save her heart … even if he risks losing his own in the process. 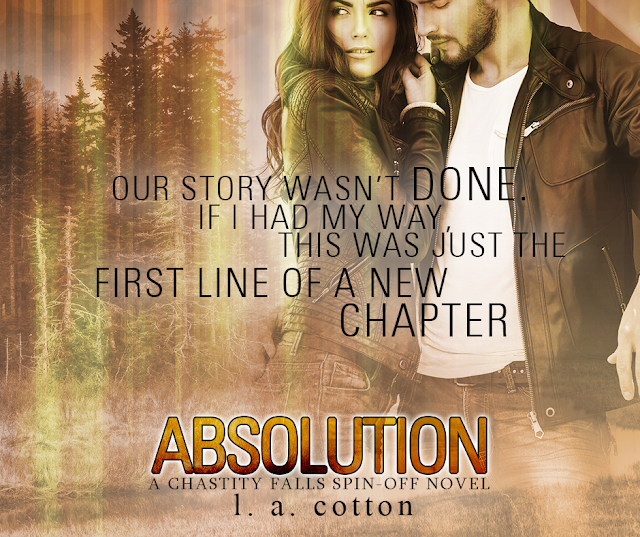 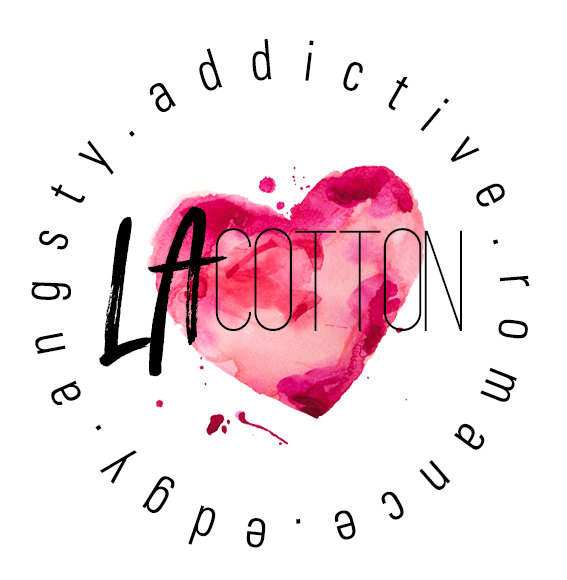 Author of mature young adult and new adult novels, L A is happiest writing the kind of books she loves to read: addictive stories full of teenage angst, tension, twists and turns.

Home is a small town in the middle of England where she currently juggles being a full-time writer with being a mother/referee to two little people. In her spare time (and when she’s not camped out in front of the laptop) you’ll most likely find L A immersed in a book, escaping the chaos that is life.

OFFICIAL WEBSITE
Posted by Krista at 8:00 AM No comments:

Living Out Loud, an all-new emotional standalone from Staci Hart is LIVE!

Bestselling author Staci Hart brings you another installment of the Austen Series, inspired by the works of Jane Austen, with a heartfelt contemporary retelling of Sense and Sensibility.
When Annie Daschle arrives in New York City, the only thing she can control is her list.
Not her father’s death or the loss of her home. Not the hole in her heart or the defective valve that’s dictated so much of her life. But she can put pen to paper to make a list of all the ways she can live out loud, just like her dad would have wanted.
See the city from the top of the Empire State Building: Check.
Eat hot dogs on the steps of The Met: Check.
Get a job at Wasted Words: Check.
What wasn’t on her list: Greg Brandon. And just when she thinks she’s figured out where to put him, everything changes. In the span of a few staggering heartbeats, she finds herself her caught in the middle of something she can’t find her way out of, with no clear answers and no rules.
List or no list, she realizes she can’t control anything at all, not even her heart.
Not the decisions it makes, and not the moment it stops. 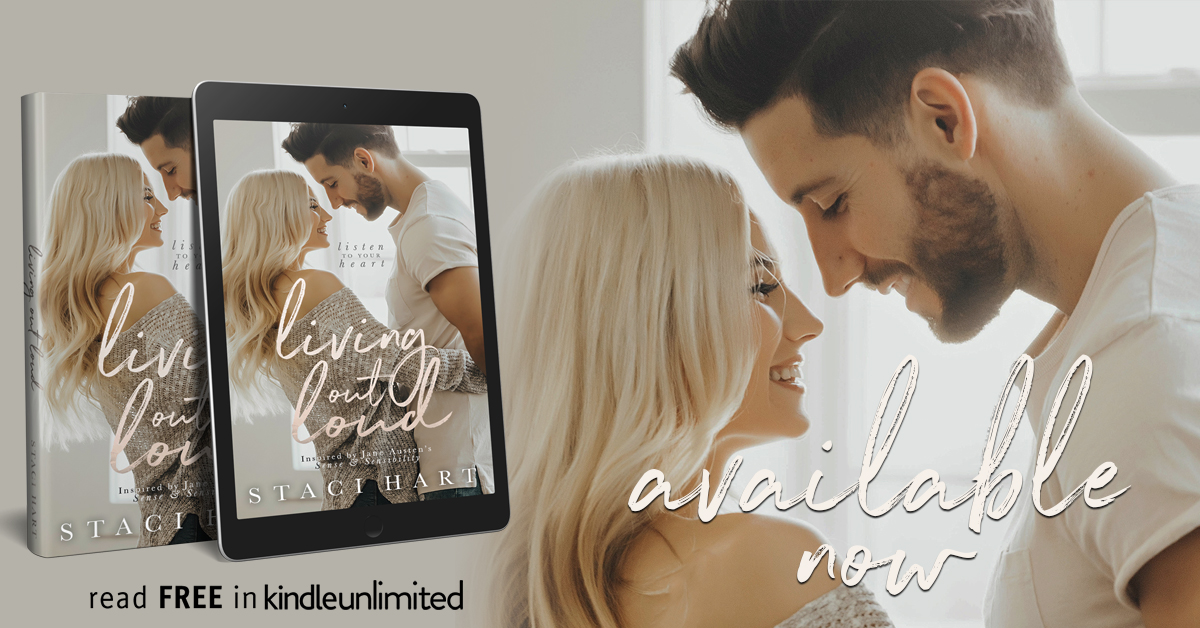 About the Author
Staci has been a lot of things up to this point in her life -- a graphic designer, an entrepreneur, a seamstress, a clothing and handbag designer, a waitress. Can't forget that. She's also been a mom, with three little girls who are sure to grow up to break a number of hearts. She's been a wife, though she's certainly not the cleanest, or the best cook. She's also super, duper fun at a party, especially if she's been drinking whiskey. From roots in Houston to a seven year stint in Southern California, Staci and her family ended up settling somewhere in between and equally north, in Denver. They are new enough that snow is still magical. When she's not writing, she's reading, sleeping, gaming, or designing graphics.